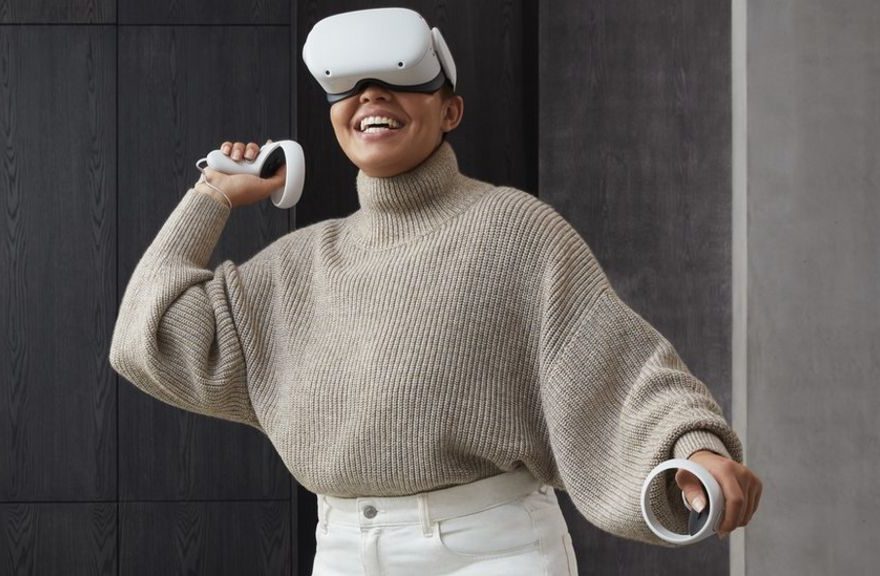 Facebook has unveiled its second-generation Oculus Quest virtual reality headset, promising higher-quality visuals at a significantly lower price than many had predicted.

It also revealed two blockbuster franchises – Assassin’s Creed and Splinter Cell – were being developed for the platform.

The firm has been unable to meet demand for the first Quest in recent months.

But one industry-watcher suggested it is likely to remain a “niche” product.

The launch comes 16 months after the original Quest’s release.

The all-in-one machine distinguished itself by offering users six degrees of freedom – meaning they could walk around virtual worlds in a limited space as well as look up, down, left and right – without needing separate external sensors or to have its software run off a PC.

The new model features higher-resolution displays, which now offer “almost 2K” per eye. The firm says that represents 50% more pixels than before, and they have been arranged so that the gaps between each pixel are less apparent.

Facebook suggest one benefit is that text will be easier to read.

However, the trade off is that it has moved from using OLED to LED screen technology, meaning the blacks may be less deep than before, affecting contrast.

use of the more powerful Qualcomm Snapdragon XR2 processor, which is capable of handling higher-resolution 360-degree videos as well as more complex graphics

Many of the details had leaked in advance.

However, the price has proved to be a surprise.

Experts the BBC spoke to ahead of the launch expected it to be anywhere from the same price as the original quest up to about a third more.

Instead, Facebook has cut the entry level price from £399 to £299 for version with 64 gigabytes of storage. A second version costs £399 and provides 256GB of storage.

That could help drive interest at a time when many gamers are focused instead on the forthcoming launches of new PlayStation and Xbox consoles.

“At this price, we believe the device is a loss-leading product, demonstrating Facebook’s desire to simultaneously drive greater adoption of virtual reality and capture a larger share of the market,” said Leo Gebbie from the consultancy CCS Insight.

“We fear that rivals like HTC will not be able to keep pace with Facebook’s aggressive approach.”

But another industry-watcher had doubts that this represented VR’s breakthrough moment.

“The upgraded image quality is important, but this is still a stepping stone, an incremental step towards mass adoption,” commented Kevin Joyce from the VR consultancy Tiny Brains.

“The Quest still needs to come further down in size and weight, and the graphics are still what you would have got from a console two generations ago.

“But Facebook is steadily paving the way for VR to go mainstream with what is a very calculated effort.”

One challenge facing the firm is that it remains difficult to convey the appeal of VR until a person tries it, which is challenging at a time Covid-19 prevents stores putting out headsets to test.

A number of existing owners have suggested they will ditch the platform because of its insistence they use Facebook logins with the headsets rather than a separate system.

Oculus Quest headsets have sold out within hours of coming into stock for most of 2020.

But while the coronavirus pandemic may have made the tech more appealing to consumers living under lockdown, it also constrained Facebook’s ability to order more from its suppliers.

“Shipment volumes across the VR sector are still extremely low compared to many other categories, and for now gaming is still the only category driving sales of the products,” commented Francisco Jeronimo from the research firm IDC.

A deal with Ubisoft to create made-for-VR entries in the Assassin’s Creed and Tom Clancy’s Splinter Cell series that will run natively on the Quest should add to its appeal.

Until now, many of the games on offer have been from smaller independent studios working with relatively low budgets.

Facebook said it would also soon release a multiplayer version of its rhythm-based game Beat Saber, which is already one of the Quest’s most popular titles, along with an expansion pack featuring the K-pop band BTS.

It also showed off the latest footage from Population: One – a Fortnite-like battle royale shooter designed for VR, which has already been years in development.

It is also making it easier to link the machine up to a PC to play titles off a more powerful computer, and would soon support gameplay at up to 90 frames per second.

But the company is also looking beyond gaming, and showed off a concept it called Infinite Office.

This allows people to enter a huge virtual working space where they can run multiple screens of all sizes. And it said it was working with Logitech to develop a physical keyboard that would work in VR.

Facebook said that it was also continuing to work on augmented reality glasses, which will overlay graphics over a view of the real world.

It now calls the initiative Project Aria and said a few hundred of its staff would soon be equipped with prototypes to collect data while moving within their homes, Facebook’s offices and in public spaces.

Unboxing the previous Quest was the first time I really had the feeling that VR was at last ready for consumers.

A sleek looking bit of kit, from top to bottom everything just worked. All it needed now were some users.

While the second generation’s improvements in processor, storage and display resolution will be appreciated by those already active in the area, it is the pricing – the cost of a low-end smartphone – and blockbuster gaming tie-ups that Facebook hope will win it new eyeballs.

In the year of big console launches the question is whether even this ultra-aggressive pricing strategy will turn enough heads.

But if any supply chain issues beset the PS5 or new Xbox series, you can be sure the Quest 2 is ready to make some very real in-roads into the gaming market.